I am a product of Austin ISD. I grew up on Circle Drive, where my parents still reside and attended Oak Hill Elementary during my 1st grade year. The old Oak Hill Elementary. The rest of my elementary years were spent at the new Oak Hill Elementary. I attended Joslin Sixth Grade Center and Porter Junior High (now Ann Richards). Our area was bussed to Travis High School, the best years of my school career. I was a Rebellette, in the top Choir, and performed in many of the school’s theatre productions. I prided myself in straight A’s and my parents claimed I joined every club twice. Nothing came without hard work and determination. I graduated in 1985 and went on to graduate from the University of Texas at Austin in the fall of 1988. I earned a BS in Education with a minor in English. Recently, I earned my National Board for Professional Teaching certification in Mathematics.
During my college years, I worked at Blackshear Elementary and began substitute teaching as soon as possible. My first teaching job started in the spring of 1989 at Linder Elementary where I taught 5th grade. I taught 5th grade for the next 19 years moving to Menchaca in the fall of ’93 and then Baranoff when it opened in the fall of ’99. Since I had taught all subjects, I decided to get a general certification for Middle School. I’ve taught Math, Science, and LA while at Small. I moved to technology 3 years ago (after becoming certified). I’ve hosted a plethora of student teachers and interns. I’ve been hosting future teachers from Uteach (at UT Austin) since the fall of 2012. I was a teacher at Small’s Summer STEAM Camp in 2012 and 2013. I then became director of STEAM Camp and continue in that role today. For the past two years, I’ve also worked for the Twilight Program, a tutoring and credit recovery program. Lastly, I also own a small (minute actually) business selling chicken and duck eggs.
I lived at home until I married after a 4 year engagement in July of 1989. We divorced in August of 2016. I have 2 children, grown and flown, and Phoebe. My son, almost 28, lives and works in Austin. My daughter, 24, is a senior in the Honors College at Texas Tech University. Both of my children have special needs, so I know what it’s like to fight for your child.
My son was a premie (7 lbs 5½ oz though) and had medical issues. He was ill from day one and we spent a lot of time in the Critical Care Unit at Brackenridge Children’s Hospital. He was always different and was diagnosed with ADHD, a learning disability, dyslexia, dysgraphia and almost everything else except being on the Spectrum. That wasn’t confirmed until he was 19 and had dropped out of college. During his 8th grade year, he was assaulted by a group of boys going around trying to get kids to fight. He tried to walk away but ended up with Traumatic Brain Injury. It’s been a long road, but after almost 14 years, I finally saw a glimmer of who my son used to be.
My daughter was born healthy and we took her home the next day. Before she was 48 hours old, a brain aneurysm burst causing a hemorrhagic stroke. She had a Grand Mal Seizure and stopped breathing. I did CPR until she started breathing and her dad had to continue when I went to call 911. She deals with seizures and DPDM (Daily Persistent Debilitating Migraines) and had to leave school at the end of 7th grade. We made multiple attempts to get her back into school until she became fully incapacitated. That’s when I learned what fighting for my child really meant. We did UT High School (along with home school) and she graduated just days before her 21st birthday. Attached is a link to a short documentary about her. https://www.youtube.com/watch?v=hQoqg52ZoI4 The pictures are of the first unit, she now has 2 full units inside of her.
Needless to say, I understand special needs and accommodations. Feel free to ask me if you ever have questions about this as I believe that everything happens for a reason and our experiences have helped others through some rough times. I truly care about your children and while I can’t promise you I’ll never make a mistake or a choice with an undesirable outcome, I can promise that I will never intentionally harm a student in any capacity. 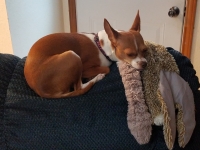